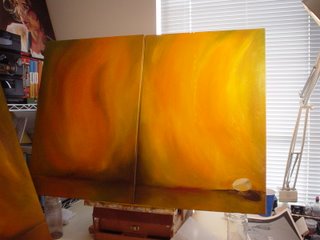 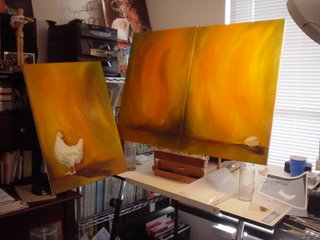 Well, Ive finally gotten all three panels of the triptych underway. Take a look, see what you think...
Posted by Katy at 4:29 PM No comments:

Here are the paintings so far, more to come.
Don't forget there is one more panel, and I
will get that up as soon as possible! 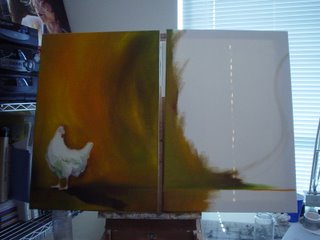 The Chicken or the Egg

Which came first? Well a friend of mine decided that when he wanted me to create a painting for him, that this was his subject matter. He wanted people to look at the painting and ponder this question. So we decided together that a triptych would work nicely. One painting would be of a chicken, the center would be a void (to symbolize the creator, or the question, or whatever you may personally conclude), and the third painting would be an egg.

The other request was that the two outer paintings could be swapped for each other at any time to rephrase the question, maybe the egg was first rather than the chicken. So here are the sketches, in the next post I will add images of the beginning stages of the paintings.
Posted by Katy at 1:55 PM No comments:

Hey there everyone. This new blog is a place where I will update all of you on my current projects, painting, illustration, graphic design, whatever it may be. Keep checking back to see whats new.
Posted by Katy at 12:57 PM No comments: