This weekend is Picture Circus in Georgetown. I've been preparing this week for the festival put on by the Georgetown library, in honor of El Dia de los Ninos. I'll be there 10am - 4pm, selling and signing books, selling prints and talking about the illustration process. For more info on the festival, go here.
Posted by Katy at 2:32 PM No comments: 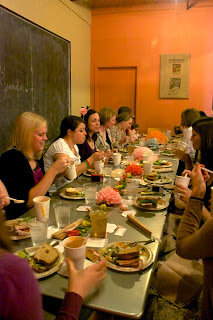 As Matron of honor in my Sister-In-Law's wedding this July, it is in my job description (and I really wanted to! I didn't do it just because of the job description.) to throw a bridal shower for the bride. Being as she is in Kansas City, and I am in Austin, I needed a little more help from her than I normally would ask for this sort of thing. The original thought was a formal tea party, but the cost per person is exorbitant. Then we thought maybe a spa day shower, Mani-Pedis, with some wine and food. Well the salon wasnt large enough for our group for a lunch and Kansas has wierd liquor laws. So, in thinking of another option, she suggested a yummy Frozen Yogurt/Coffee Shop she likes. It was the perfect casual luncheon location, followed by a trip to the salon for those who chose to do so.

I wanted to keep with her invitation themes and designs, but make it different enough that it wouldn't give away the "ooohhhs" and "ahhhsss associated with opening the magical invitation envelope in a few weeks. So I used the same themes, colors, and changed the fonts. I think it was a success and I was very happy with them. 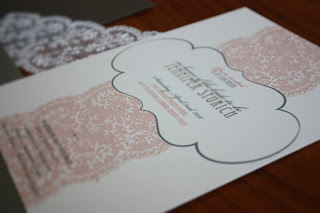 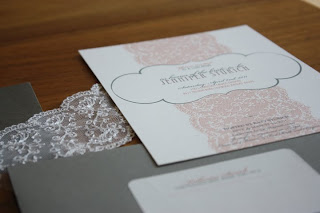 I sent out a Save The Date for the shower, even though its not widely accepted, or usually unnecessary to do this. I wanted to be sure to nail down the numbers for the salon, and get the appointments for that made, while still having everyone mark their calendars with a date for the luncheon. It was an just a PDF in an email, but included the same designs and themes as the rest of the package. A few weeks later I sent out the invitations; A7 size flat white card, in grey envelopes with white labels and a lace printed seal. 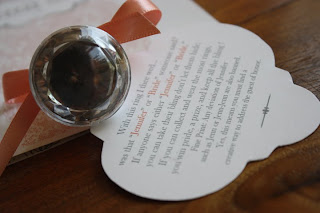 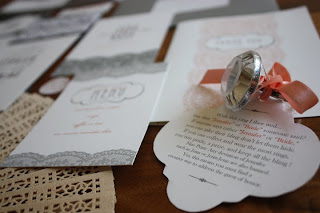 At the shower each lady was presented with a ring tied to a card with instructions for a game. The guests were not allowed to say the brides name or the word "Bride," and if they did someone could steal their BLING. The game was, I felt, classy and not cheesy or annoying as many shower games can be, and it wasnt embarrasing for the bride. At each place setting was a basswood lace cut fan ordered from a wedding favor site, with a place card and menu. Some of the girls arrived early to help me set up, making tissue pom-poms for the table and we lined the center of the table with ribbon an cut flowers. 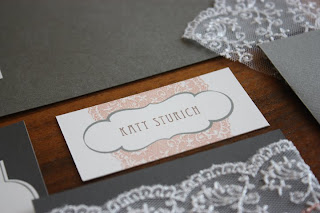 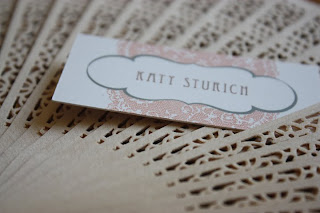 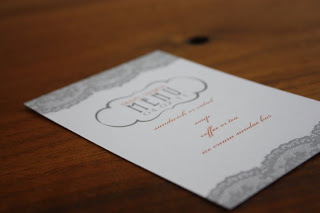 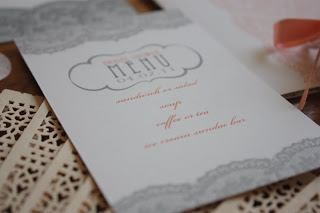 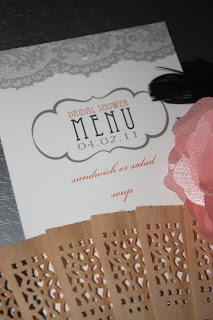 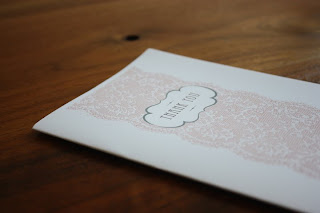 The luncheon consisted of fresh sandwiches, salad, soup and topped off with frozen custard of course! 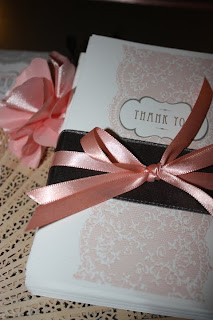 I want to thank all the girls for helping set up, and everyone for attending, we had a nice time. Also, Foo's Fabulous Frozen Custard in Kansas City was so easy and fantastic to work with! The salon following was nice and relaxing, though there were a few hiccups in the appointment set-up process and payment process, the services offered by Par Exsalonce in KC were fantastic as well.
Posted by Katy at 10:48 AM No comments: 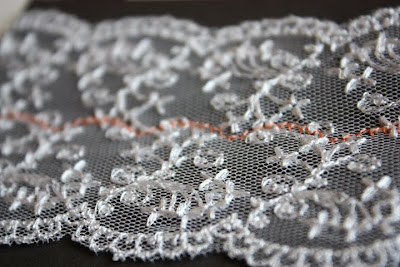 I have been working on wedding details and invitations with my sister-in-law and her wonderful husband-to-be (we call him pseudo-uncle Brandon, for my daughter, soon-to-be Uncle B!). I posted a while back with images of their Save The Dates, and I am in the process of editing photos of the Bridal Shower I hosted for the bride earlier this month. Everything is cohesive and coming along together nicely. The invitations are assembled and have been mailed to the bride -- awaiting stamps to be sent off to the invitees. The next step are buffet cards, a favor card (or some-sort) and programs. But, until the invitations have been mailed and recieved, I wouldnt want to ruin the surprise! Here is just a taste of the detailing we have put together for this special day.
Posted by Katy at 10:37 AM 1 comment:

Bloom Favorite: Its in the details

I am amazed and inspired everyday when I peruse my favorite blogs and see all the attention to detail. The details that some of these brides, wedding planners, grooms, photographers, stationers have come up with allow me to be a kid in a candy store looking through the incredible photos. I've picked out a few the past few days that I would like to share with you, in hopes that not only will you see the endless possibilities, but for you to be inspired and see the joy that the details can bring.

What a unique idea to have a pie contest at your wedding! Brilliant! (pictures found on
GreenWeddingShoes.com) 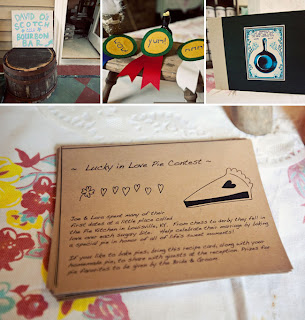 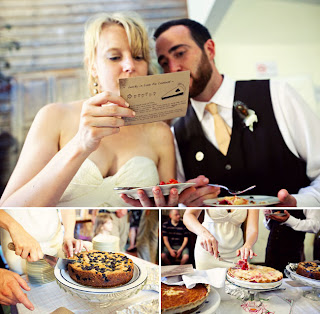 This Louisville wedding had every perfect detail in place, but I absolutely love the original stationery ideas. (pictures from StyleMePretty.com) 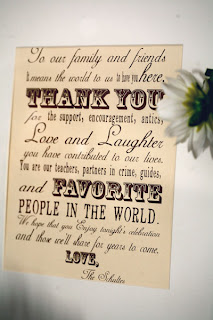 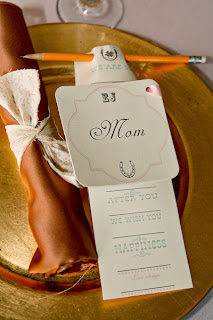 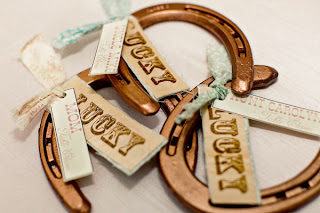 I am a huge fan of photo booths or picture stations at weddings, and think the bride and groom get to remember what amazing people surround them on such an important day, usually with a little flair! (pictures from StyleMePretty.com) 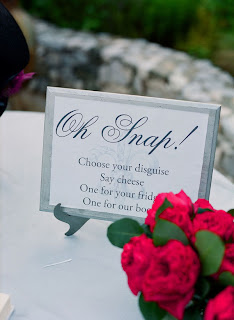 What a beautiful detail for place cards. These really tied the whole theme in while bringing texture to the table. This wedding is nothing, if not creative and full of exciting details. (greenweddingshoes.com) 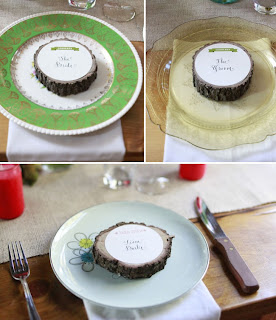